Ahh, the Golden Arches. As synonymous with American culture as Elvis Presley, Hollywood, and Seinfeld. McDonald’s has been around since the 1950’s, slinging hamburgers, fries, milkshakes, Happy Meals, and Ronald McDonald; a brightly-colored oasis for busy parents, kids, families, and workers-on-the-go to get something to eat.

In the last 18 months or so, McDonald’s has had an experience much like Keanu Reeves’ character Neo in The Matrix. It has taken the (very expensive) red pill to see just how deep is the rabbit hole of overhauling what the public’s view of McDonald’s.

The fast food giant is pouring $1 billion into redesigning many of its stores to change public perception from, as this USA Today article puts it, “the 500-pound clown of fast food”, to an entity that competes with more upscale restaurants like Starbucks, Chipotle (rather ironically, formerly owned by McDonald’s), and Panera Bread. This is an effort to entice patrons to begin viewing McDonald’s as a destination restaurant as opposed to food that is eaten only when time is at a premium.

This is not the first time a huge pillar of the American economy has attempted to rebrand itself as more “upscale” than what the public currently pigeonholes it as. Remember a few years ago when Wal-Mart went after Target during the holidays with ads from the likes of Garth Brooks, Queen Latifah, and members of Destiny’s Child (including Beyonce)? That failed on an epic scale. Why? Because Wal-Mart has a stranglehold on being the biggest of the big box discount stores.  They invested literally billions into gaining that reputation, and it’s a brand truth, as well.  It’s just not believable to the average American that Beyonce would shop at Wal-Mart, so the message comes across as irrelevant and fake, causing trust to falter and the brand to erode.

40% of McDonald’s profit comes from Happy Meals. That’s revenue derived from families on the go, the bright red roofs, the plastic tables, the Play Place, and a corporate culture aimed at getting people in, out, and on their way. The people that go to McDonald’s on a regular basis aren’t interested in organic food or fair trade coffee, and they’re not interested in getting work done or catching a few extra study hours.  Leave that for the Starbucks crowd.

If McDonald’s wants to build nicer restaurants, that’s a fine idea.  But they shouldn’t pretend they’re higher-end quick-casual restaurant.  They’re not.  (Side note: if McDonald’s wants to be a quick-casual restaurant, they should buy one, or build one … which is probably a great idea, if you ask me.  Which you didn’t.) Plus, no matter how you dress it up, it doesn’t smell like gourmet coffee when you walk inside (or pull up to the drive through window, for that matter) … it smells like … McDonald’s.  People just won’t be interested in hanging out in that environment.

Make no mistake though, McDonald’s is directly going after Starbucks. In Sedalia, Missouri, there are two McDonald’s. One of them is directly across a very busy Highway 50 from a Starbucks. It currently looks like this: 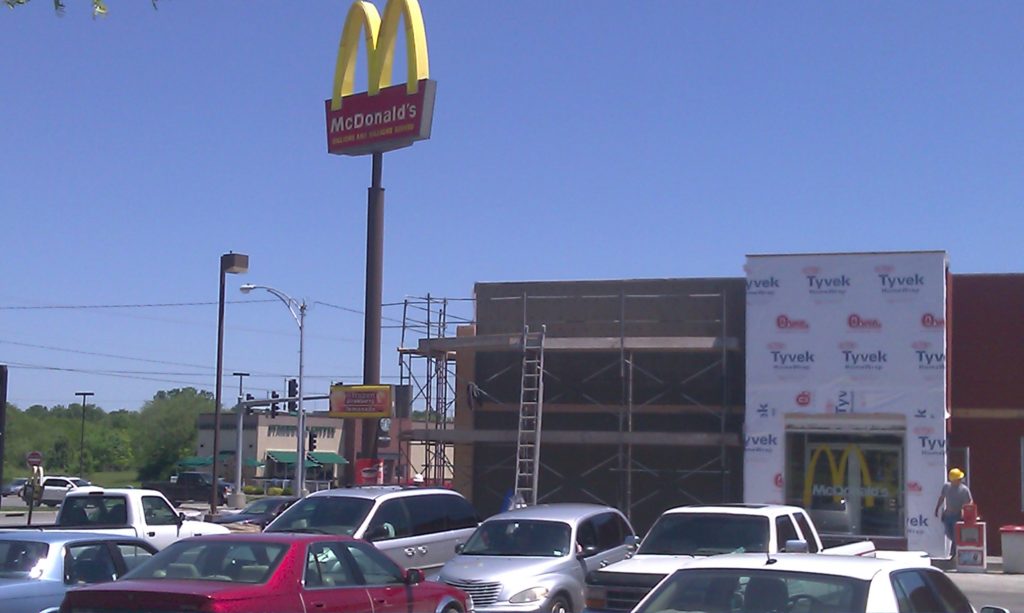 This rebranding experiment is heading in the same direction as Wal-Mart; an epic failure. McDonald’s is simply too entrenched to ditch it’s 56-year old brand strategy.  Which, by the way (lest you should feel I’m overly negative on McDonald’s brand strategy), has been classically brilliant and phenomenally successful.