It’s easy to attribute a successful businessman or woman’s achievements to mere luck. In fact, such circumstance often seems to be the case in today’s economy—people happen upon a “random” big break, resulting in a life of luxury and leisure, while others spend their entire lives working just to stay alive.

That being said, most of the time, a good business takes a little good fortune and a lot of preparation, research into one-time payment shopping cart, business plan writers and resilience. Take local shop owner Nathan Fleischmann, who created his own luck in a matter of 6 years. He went from losing his job, to forming an inkling of an idea, creating a proof of concept vehicle and eventually pivoting into a brick and mortar business.

The Start of a Lucky Legacy

Local business owner Nathan Fleischmann was let go from his former job during the peak of the recession in 2010, an unlucky life change that led him to pay close attention to the industries that stood afloat despite economic slowdown.

He noticed that random items such as chocolate, tires, mattresses, and footwear still sold well; all things that people could justify spending money on when funds were tight. Soon after, he began to analyze the mid-Missouri market of footwear, and discovered a gap of contemporary fashionable shoe offerings in Columbia, MO.

Nathan’s entrepreneurial spirit was sparked throughout the course of his childhood; during which, he has fond memories of playing make-believe businessman. He remembers playing restaurant with his sister, pretending to use a ground-level bedroom window as a drive thru, with inklings of wanting to own his own business from a young age.

Nathan says his shoe store operations are influenced by his time spent attending art school in Chicago, where he worked at H&M when they first came into the market. There he learned the processes, practices, and values that the global corporation implemented in order to achieve success. According to Nathan, people would come from other retailers and ask if H&M were hiring because they heard such good things about the company, which had extremely low turnover for a retail store. Likewise, he hopes he can bring the same attitude to his independent shoe boutique.

During his time at art school, Nathan was interested in the commercial application of art. He was extremely interested in blending art and commerce together to form marketing and communication pieces, which helped him learn how businesses worked and reaffirmed his desire to eventually own a business and work for himself.

After forming a blog that served as a repository of his findings and thoughts about the shoe market, Nathan started observing the type of organic traffic that visited his website. There was not a day where he would forget about the goal of financial freedom. Just like successful businessmen who remind themselves of the mission with wall paintings like the Money Man designs, he started to read daily motivational messages. He also began a job at Columbia College around the same time, where a coworker motivated him to mobilize his findings and start his business out of a truck. As a result, Stadium Shoes was created, and was gradually introduced to the market through private events and festivals.

“It was really a proof of concept vehicle to me more than anything,” Nathan said. “[The vehicle] was there to do data, and market research, and figure out how to properly open and establish accounts. It was there to find out who was actually shopping the truck, where they lived in and around the Columbia area and what brands they were interested in. So, [it was] kind of more of a crawl before you walk, before you run, type thing. And so I got tons of positive feedback.”

People then began to express how great it would be if Stadium Shoes became an actual store, and around this time, Nathan transitioned his blog into an e-commerce site. A few months later, he decided to take a leap and ask people if they’d be willing to put their money where their mouth was.

Betting His Luck on the Plan

In order to get the process of opening up a shoe store started, Nathan mapped out a build-out plan, as well as profit and loss projections for several years. He also studied the local business landscape and mapped out different household demographics and incomes.

After Nathan began exploring partnership opportunities and retail space, he started vetting out his business plan, and soon all the elements began to get traction. He found commercial space after performing market research with a local resource called the Small Business Technology Development Center, and gained interest from some minority stakeholders. After everything aligned, Nathan got his small business loan together. Another option was to get a merchant cash advance.

“I opened arches footwear on the south side of Columbia because it was really a desert for retail, and for specifically footwear options as the city has grown, and that was the problem that I was looking to solve,” Nathan said. “People had expressed they wanted more footwear options, and they were tired of looking for parking downtown, and the mall was no longer really seen as a fit for them for shopping. And so I thought to get a fast loan approval and ‘well, then we’ll open a shoe store out south and see how it goes,’ and I’ve heard nothing but positive feedback and excitement when people walk through the door.”

Using Logic To Get Lucky Results

As an independent store, Arches Footwear gets to focus their efforts on buying for the local market. According to Nathan, the footwear industry is very fragmented, so sometimes, larger businesses have buying power and other advantages that independents don’t. As a small business owner, he looks for ways to take advantage of some of the practices that larger corporations use. Luckily, Nathan said he works with very supportive brands that are willing to take a risk on his startup.

As mentioned before, Nathan has done his research to make sure he stays ahead of the shoe game. He had a focus group in early 2016 where he asked various women; “What does comfort mean to you?”

“It was really more about heel heights, and having enough strap or toe coverage,” he said. “So that’s been a lesson learned so far in pivoting from the shoe truck to the brick and mortar too; defining what means comfortable and stylish to a group of people doesn’t necessarily always mean your grandma’s orthotic shoe.”

Nathan says he’s also always paid special attention to the leaders that he’s worked for at various companies. He has always been curious about how they manage their people power, which Nathan considers an important resource to understand.

“While I’ve always wanted to own my own business, I always knew it was important to kind of take my time and really see what I can learn at each place that I worked at,” he said.

Lessons On Luck From A Unique Perspective

As a member of the LGBT community, Nathan says he’s always monitored and observed the different implications that took place in the different organizations he’s worked for. He’s always kept in mind that if he started his own business, he’d look for ways to help spread the word and communicate that LGBT people are a fantastic driver of the economy, with dreams to make things happen and make the world a better place—just like anyone else does.

“I think for so long, for LGBT people and our community, it’s been such a tough uphill battle from just getting equal rights to not be fired in a workplace just because you’re trying to get to work, to now trying to go out on your own as a business owner is even that much more scary and tough,” he said. “I hope I can end up being a good example for any class of minorities, like skin color or gender preferences, and I hope that they can see that they too can follow their dreams. I think there’s been a lot of people in the Mid-Missouri business landscape that have been very supportive and helpful in my journey too.”

After overcoming different hardships, Nathan says what some people may consider surprising or hard is “just life” from a gay perspective. For example, even though Arches Footwear had a few slow days throughout it’s first few months, Nathan reiterates that slow days are bound to happen and takes advantage of the opportunity to learn.

The Luck Of A Supportive Community

Nathan says there have been more people wanting to support Arches Footwear than he anticipated, and he is pleasantly surprised by the camaraderie he has formed between other independently owned businesses in Nifong Square. For example, customers often pay Arches Footwear a visit after they get their haircut two doors down at a salon called Ell & Co.

“I’m really excited about what the potential holds to give back to my local community,” he said. “I want to be able to give back to our community too and just sort of pay it forward. So [we are] always looking for the next relationship that we can build and make an impact on, kind of practice what we preach type stuff.” 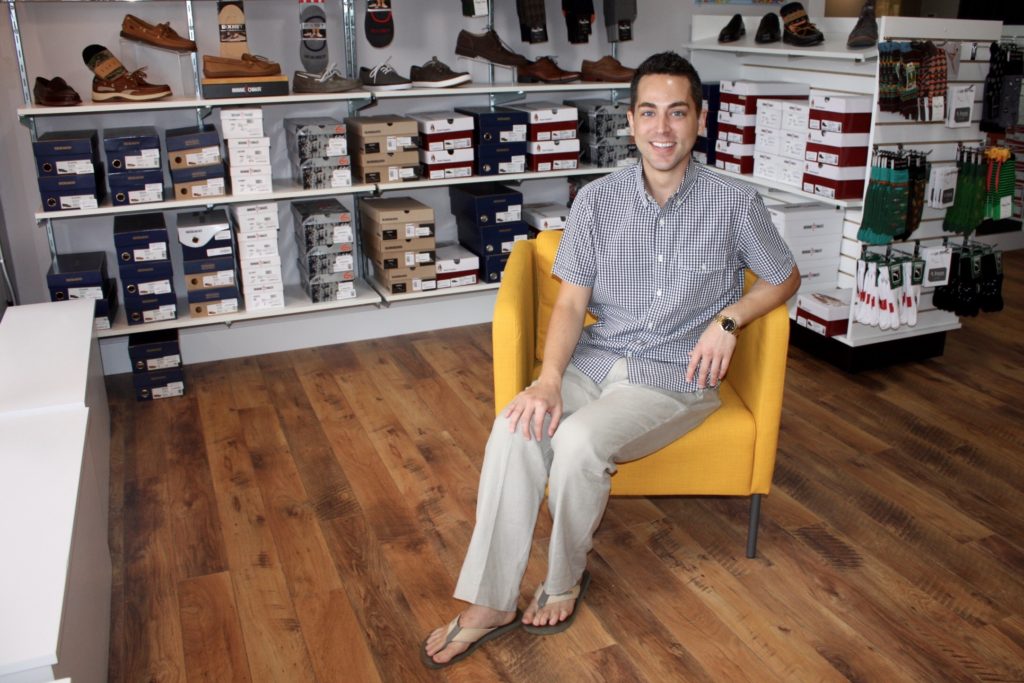 Overall, Nathan thinks shopping needs to get back to being a fun experience again—not just an online chore. He uses different tactics to draw new customers into the store, like putting most of the products out on the sales floor, and offering an array of interesting chairs to create a low-pressure environment. On weekends, Arches Footwear offers wine and champagne to incomers—a lucky deal for everyone involved!